The setting of pigment is important in Pure ink in order to paint as you wish. Pigment does not mean color only. It is an integration of 1. pigment wetness, 2. brush dryness, and 3. color, and they are controlled through different tools as shown in this figure. 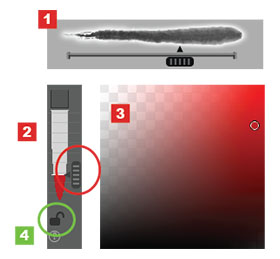 Pigment wetness is the amount of water to dilute the pigment. It affects the concentration and thus the opacity of the pigment. Besides, dilute pigment diffuses more than the concentrated pigment. Brush dryness represents the amount of pigment carried by the brush. It affects the continuity of strokes but not the concentration (and thus opacity) of pigment. Color determines the color value. Light colors are less opaque than dark colors.
This table summarizes the combinations of these three aspects for different effects. The combination in the first row is particularly useful for pigment overlapping.

Wet pigment can diffuse. To make the diffusion nice, set the brush dryness and/or the wetness of the foreground and background pigment with a certain difference. 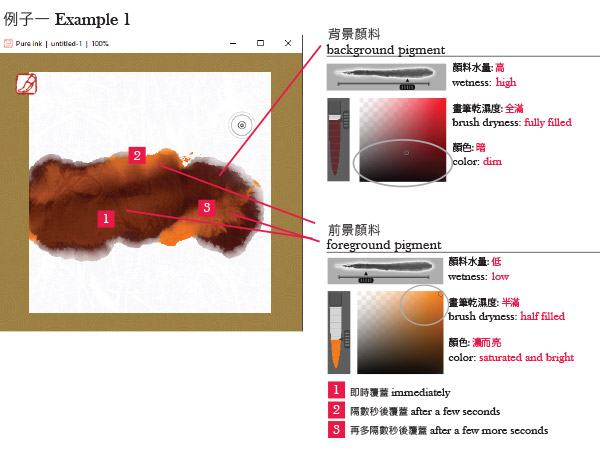 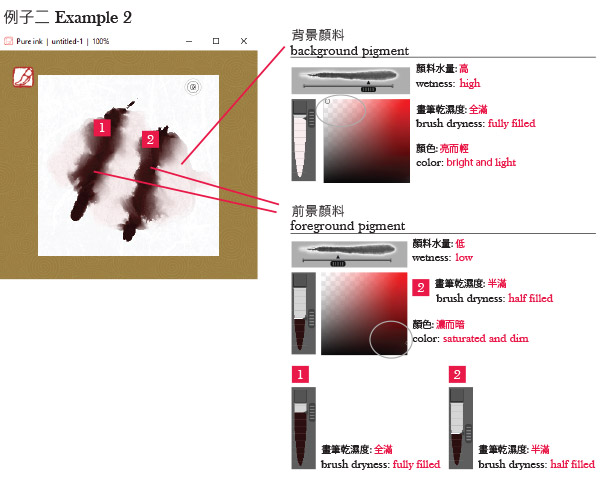 The wetness value of pigment determines its concentration and thus the opacity. Low wetness makes pigment more concentrated and thus more opaque. This makes it easier to overlap on the other pigments and creates a sense of hierarchy. 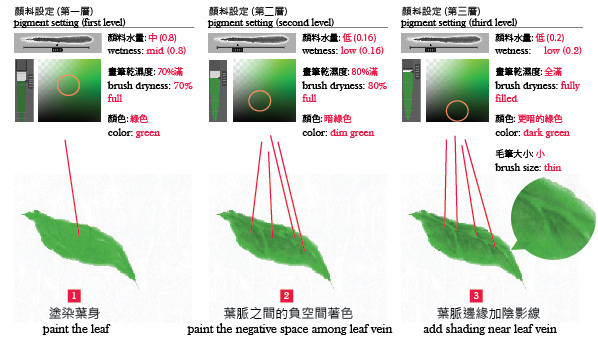 Ink artists mainly use wolf-hair brush to create various strokes by different techniques. Pure ink programs the mechanism of such brush to simulate vertical brush, side brush and inclined brush. 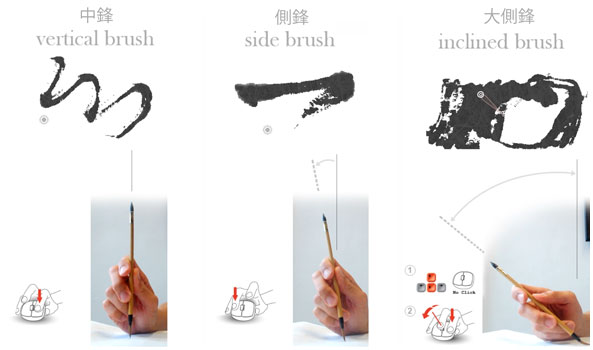 Vertical brush is achieved by pressing the left button of the mouse.

Side brush is through the right button. 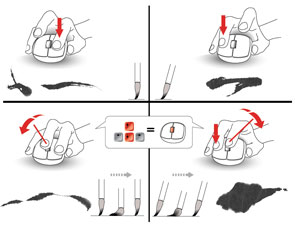 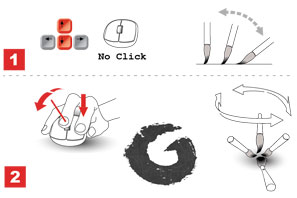 If the mouse button is pressed down again before the brush tip leaves the paper totally, the new stroke is still considered as the extension of the last stroke. Two strokes belong to the same action for undo. 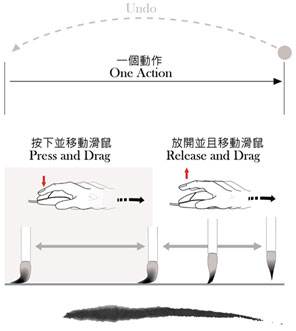 To draw a nice stroke, move your brush with varying speed.

The brush in ink art is highly elastic and the paper for ink art absorbs water heavily. The speed of brush determines the amount of pigment being absorbed by paper and thus the shape of the stroke. A brush moving with varying speed creates dynamic stroke with interesting changes of shapes. 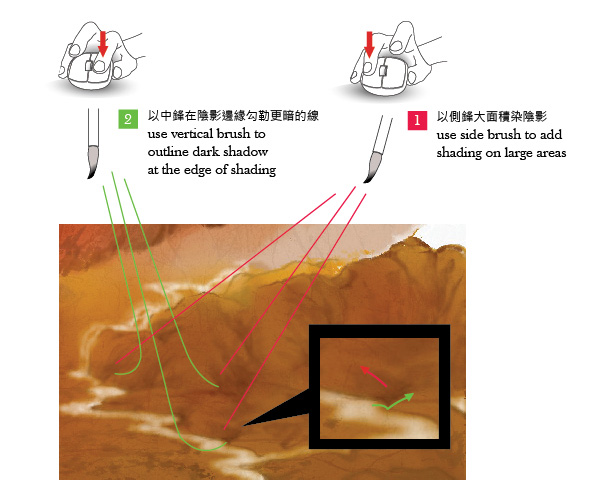 First of all we have to manage the size. Pure ink can export paintings in high resolution of 300dpi and the largest print size of that is 63cm x 63cm, or in other shapes with equal area. Accordingly, we open a piece of vertical paper with size 900 pixels x 3553 pixels. The print size of it after high resolution output is 30cm x 120cm and its corresponding image size is 3600 pixels x 14212 pixels. Based on this, how can we enlarge the print size but keep the print quality as much as possible?

The idea is to slightly tune down the printing density (i.e decrease the resolution) and slightly increase the image area (i.e. increase the number of pixels) in exchange for a larger increase in the printing area. We slightly reduced the resolution of the high resolution image exported from Pure ink to 250 dpi by Photoshop, we further increased the image area slightly by 11% to 3803 pixels x 15009 pixels, then the printing area could be increased by 60% to 38 cm x 152 cm. Since Pure ink can open four pieces of paper at the same time, we use this feature to create four parallel paintings in the software, that is, to create one large painting composed of four vertical paintings. The four vertical paintings were upscaled for printing as described above. The final combination of the four paintings results in a work of 152cm x 152cm, or 5 square feet (Figure 1).

We used the following computer configuration to operate, and the process is generally smooth:
OS: window 10
CPU: Intel(R) Core(TM) i7-8700 CPU @ 3.2GHz
RAM: 64 GB
Graphic card: NVIDIA GeForce RTX 2080
In Pure ink, we opened four pieces of vertical paper next to each other and randomly added pigments and strokes with different concentrations on them simultaneously. Figure 2 is the final look of this work in this stage.

We developed a landscape painting based on this by refining each area every time. We had to enlarge the paper covering that area and its side at the same time to add details and this could ensure continuity between two pieces of paper.

For example, by imagination, we turned the gray colors on the top left corner of the work to rocks according to the traces of pigments. We used an eraser to erase pigments and created rivers and waterfalls in the middle of the work. We painted trees at the right hand side of the work.

Since the print size of the work would be increased by Photoshop later. The richness of detail displayed on the computer screen at the original size still appeared sparse when printed on the paper. It is necessary to enlarge the drawing paper to double for fine tracing, so that the picture can have a rich sense of detail after printing. Figure 3 is the final look of the work in Pure ink. 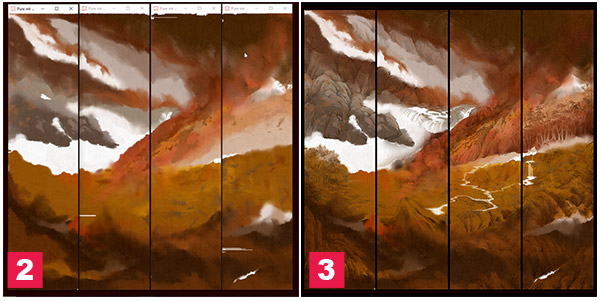 After this, we outputted each piece of paper individually at a high-resolution level and enlarge their size according to the explanation above. To adapt the settings of the printer and the printing materials, the color contrast in the image of the work underwent a one-time color adjustment in Photoshop before being printed. The work was then printed on rice paper (Xuan 宣紙) through the technique of Giclee Print. Figure 4 - 6 are the details of the printed image. 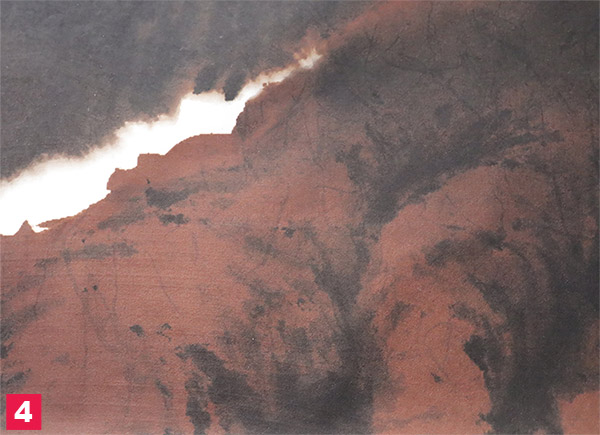 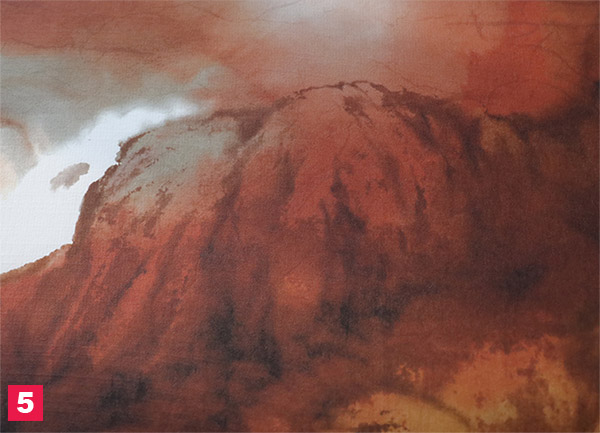 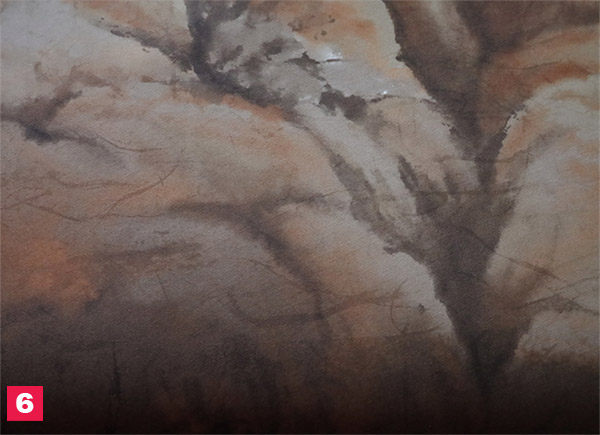 Since the printing material is rice paper. Its softness allows us to mount the work as Chinese scroll by traditional way. Finally the four scrolls were hung side by side. Figure 7 is the final look of “To See the Vast Nan Xu, the Boundless Bei Gu”.

To evaluate the performance of Pure ink in ink painting, no hand drawn element was added on the printed paper unless the signature. Only a mouse and keyboard are used to do the painting. No pressure stylus is used. 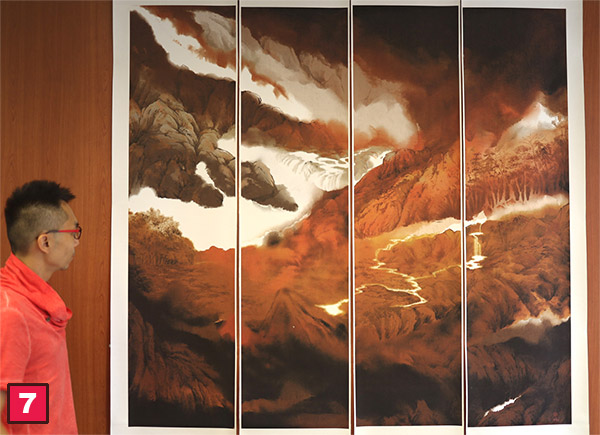 Press hotkey 'x' to switch the brush to inclined brush. After selecting color, set the wetness roughly to 0.18. Press hotkey '2' or '3' to set the brush dryness to 20% or 30% only. Rotate the mouse wheel so that the direction of the brush tip is roughly parallel to the direction of the cracks and then wipe back and forth along the dark side of the rocks. The pigment in the brush will use up. Put your finger on the key '2' or '3' continuously and press them to refill pigment when this happens. 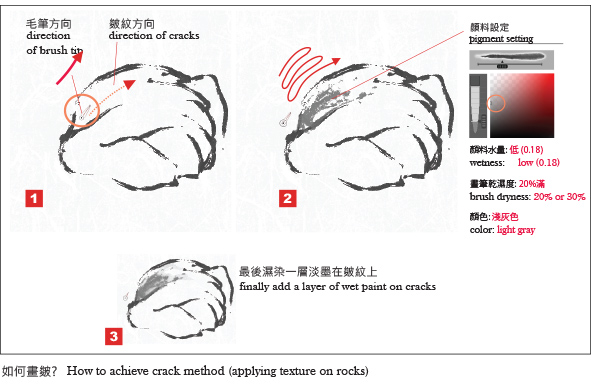 set the size of the inclines brush to be very small (diameter roughly as 20 pixels). Set the brush dryness to be low as well. Since the brush is smaller, slightly increase the pigment wetness to, says, 0.4 for easy wipping. The direction of brush tip should be perpendicular to the direction of crack. Hemp-fiber crack consists of strokes in the shape of "3". Overlap such strokes with varying density in the dark side of the rocks. 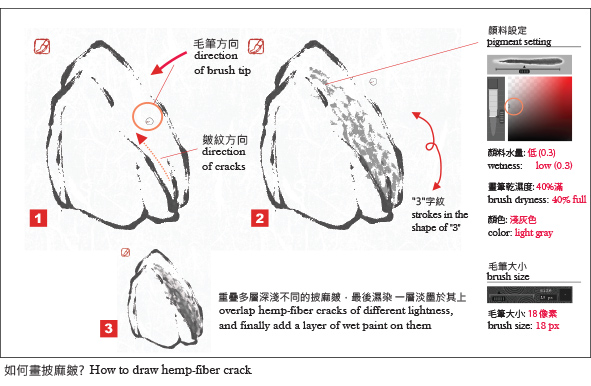 Axe-chisel stroke is done by one single wipe to form a surface, unlike the hemp-fiber crack which forms a surface by overlapping a lot of strokes. Set brush size to be large (e.g. diameter roughly 98 pixels). Use inclined brush. Adjust the length of the brush edge to match with the surface width by pressing the up and down arrow key. Short brush edge is easier to use. Set the pigment wetness to be 0.2. Press the hotkey “3” to set the brush dryness as 30%. Place the brush at the top of where the axe-chisel stroke will be created. The direction of brush tip is perpendicular to the direction of the stroke. The brush moves toward the opposite direction of the brush tip a little bit first and then turns 90 degrees and wipes downward quickly and largely. Remember to release the left mouse button before the brush reaches to the end of the stroke to make the end of stroke more loose.

If we set the brush size to be small (says, diameter as 58 pixels), brush edge to be short and wipes downward slightly, we can have axe-chisel stroke in short size 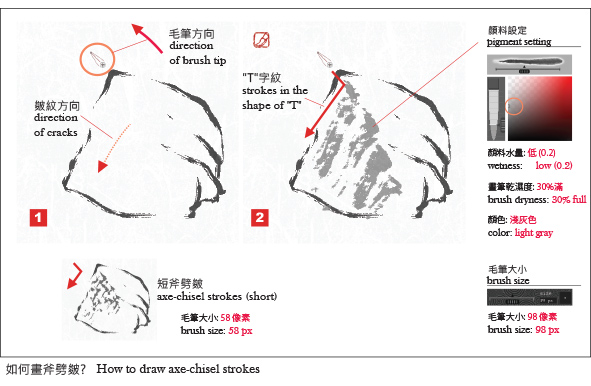 In Pure ink, we can draw stroke by mouse and simultaneously adjust the brush dryness, the pigment wetness, and the pressing force on the brush quickly through the use of shortcut keys. This brings changeable effects on one single stroke and helps simulate the one-stroke painting of Ting YinYung, a famous ink art master. The two examples on the right side of figure 1 are the effects completed with one stroke by mouse in the software. 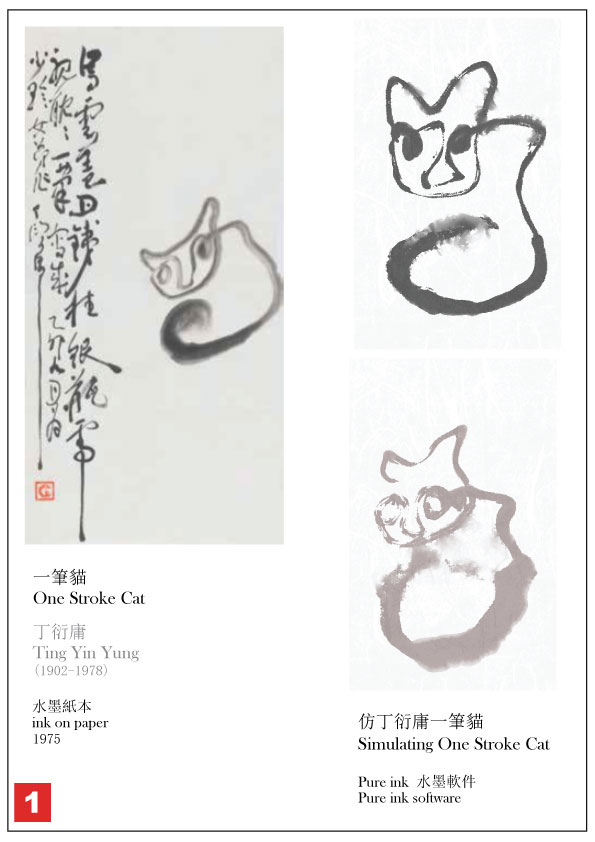 Step 1: To partially stain wet the paper
Use inclined brush (hotkey ‘x’), use lightest color, high wetness, press number key 8 or 9 to set the brush dryness to high level (means full pigmemt), randomly stain wet some areas on the paper so that the strokes that will draw on it can diffuse in different ways.

Step 2: To draw a cat by one stroke
Use vertical brush (hotkey ‘x’), set pigment wetness roughly 1.0, set the brush dryness around 6 or 7, do any of the following action(s) simultaneously while pressing the left key of the mouse to draw

Finally we should beware of the dragging speed of the mouse. Dragging it with varying speed brings subtle change to the stroke. Besides, pressing left and right key can change the size of the brush. 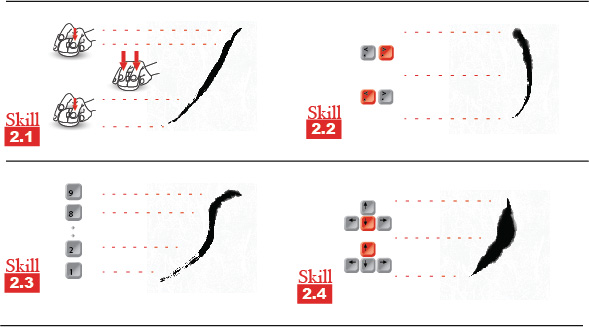 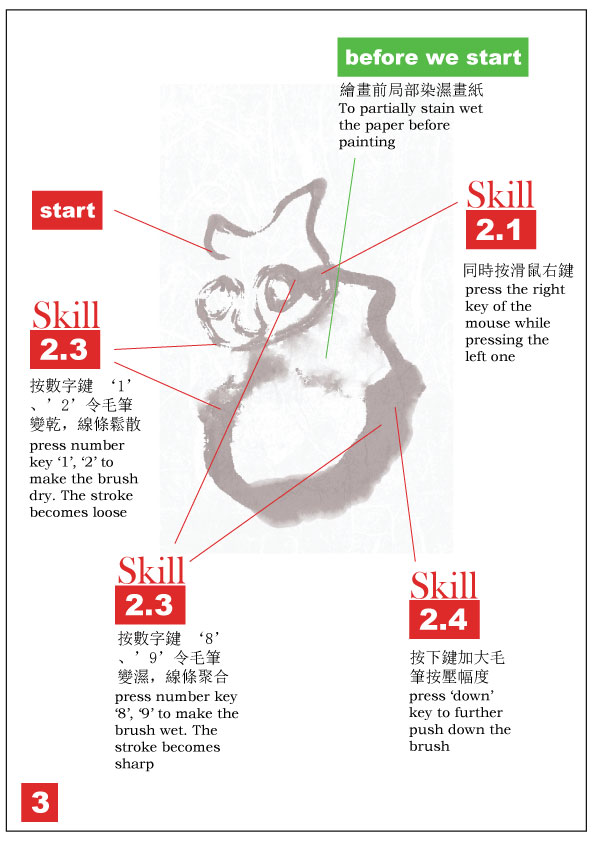 To Paint a Cow

To Paint a Prawn

To Paint a group of Mountains

To Paint a Rock (3. texturing, coloring, and adding moss)

To Paint a Rock (2. outline by inclined brush)

To Paint a Rock (1. outline by vertical brush)